There’s a New Batch of Teachers and their Names are Siri, Alexa, and Cortana 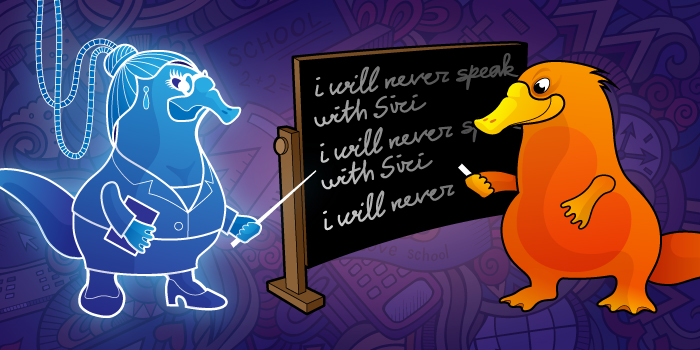 After teasing Nichols with an innovation brought back from the 23rd Century, Scotty asks to use the doctor’s computer, a nice shiny Macintosh Plus. Scotty sits down, situates himself, and then politely addresses the computer, “Computer.”

Nothing happens. After another failed attempt, Bones hands Scotty the mouse. Then, to great comedic effect, Scotty holds the mouse to his mouth, presses the button, and says, “Computer.”

This scene from 1986’s Star Trek IV: The Voyage Home was a hit with audiences, because most people found it absurd to try to interact with a computer using only your voice. Fast forward 30 years, and this is a prime example of science fiction that has become reality. We now have many realized versions of this concept: Google Assistant, Alexa from Amazon, Microsoft’s Cortana, and, of course, Apple’s Siri.

Current Intelligent Personal Assistants (IPAs) Are Only the Beginning

Beyond simple dictation, it’s now commonplace to see people issuing complex commands to these intelligent personal assistants in their phones, verbally instructing them to make phone calls, send messages and emails, and even update personal calendars. Users can access the Internet with a simple verbal command, answering almost any question posed, finally giving exacerbated parents an out when they reach the seventeenth level of their children asking, “Why?”

Of course, when you give people a new tool, they’re going to play with it, coming up with new ways to use it. After Google recently opened up their Google Assistant to developer apps, Gary Simon wasted no time in doing what any of us would do. He created an app that would allow him to “call the cops” on his kids when they misbehaved. While this was a simple conversational flow app, it begs the question, what else could this be used for?

Onno Schuit has one answer. As the founder of Frooxl, a company that specializes in developing e-learning solutions for clients, Onno wondered how these intelligent personal assistants (IPAs) could be used to teach others. “It occurred to me that you could quiz people on any kind of topic about which you can also have a conversation,” Onno posits, “Some topics you can discuss through language only. You can learn them by talking about them.” It didn’t take long for Onno to create a working Conversational Interface Tutor (CIT). This particular CIT was a proof of concept called The Bartender Guru, which “can be summoned with your Google assistant software, for instance through a Google Home device. Once it’s running, you’re practicing fake questions for a fictional liquor license.”

While the Bartender Guru is a fun concept, there are many real world applications that a CIT would be well suited for. Learning a second language, for example, is something many people aspire to.

Until now, Rosetta Stone has been the leader in language learning software. But it’s limiting, requiring users to commit to a set amount of time for a lesson. The program typically relies on hard media like CDs or DVDs to present lessons, meaning users have to be seated at a computer in order to use them.

The CIT, on the other hand, wouldn’t require any interaction aside from verbal. Onno believes this is key to the CIT being accessible to people who have been unable to take advantage of current e-learning solutions.

Onno believes it’d be perfect for a variety of scenarios, from “commuters who could keep their eyes on the road while driving a car, to people doing chores at home, or maybe cooking a meal. Previously, you could listen to an audio lesson while doing those tasks, but you couldn’t pause the lesson for a few seconds with an easy voice command.”

Your New Classroom is in Your Car, Kitchen, or Anywhere Else

Of course there are already many educational podcasts that allow people to learn while accomplishing other tasks. So what sets the CIT apart? While lectures could be part of the system, Onno hopes they would only be a small part of them, as he “would be hesitant to include too many long stretches of monologue spoken by the computer – that’s just too boring.”

The magic of the CIT comes from the interactivity. Onno likens a CIT to a tutor “who tells you about a specific topic, and then engages you in conversation. You could have a tutor who starts quizzing you, asking you specific questions.”

“But,” he adds, “the conversation does not have to be restricted to Q&A format preceded by a lesson in monologue format. You could also use the Socratic method, where the tutor not only tries to convey knowledge, but also stimulates critical thinking.”

Where We Go From Here: If You Have an IPA, You Can Have a CIT

What’s most intriguing, though, are not the ideas that we’ve thought of, but what we haven’t thought of. With Google and Amazon both allowing members of the community to develop their own apps for the intelligent personal assistants, we don’t have to choose between developing an app for either Android or iOS.

As Onno points out, “The interesting thing is that you’re not tied in to Google’s Assistant apparently, but you can also use your conversational interface for Slack, Amazon’s Alexa, Microsoft’s Cortana, and for Facebook Messenger.” This makes IPAs desirable to businesses as well, which won’t have to add months to development time to support multiple platforms.

Science has a bad track record when it comes to fulfilling the promises of 1980s Sci-Fi. Space travel is all but stagnant, going 88 miles per hour in a sports car only ever moved me through three dimensions, and I have yet to see a functional hover board.

When it comes to computing, though, we’re leaps and bounds ahead of the curve. IPAs and CITs represent actions in the beginning of the 21st century that weren’t predicted to occur until the 23rd century.

It’ll be interesting to see where the community takes this technology in the future. While it may yet be some time before we have fully autonomous, humanoid CITs and IPAs, their applications for e-learning are numerous and still expanding.  In the meantime, if someone at Google could go ahead and start working on a holodeck, that’d be great.

This article was first published on elearningindustry.com.

How to Polish Your e-Learning Development Cycle: Catch and Bash Bugs the Right Way

Whether you’re reading a textbook or the great American novel, watching the news or a weekly drama, or catching up...

Solo E-Learning Design: How to Make the Most of Your Resources

Hollywood has a way of making the loner seem appealing. Whether it’s a wandering gunman, like Clint Eastwood’s Blondie...