Will VR Merge Story With Real Life For More Effective Gamification In E-Learning? 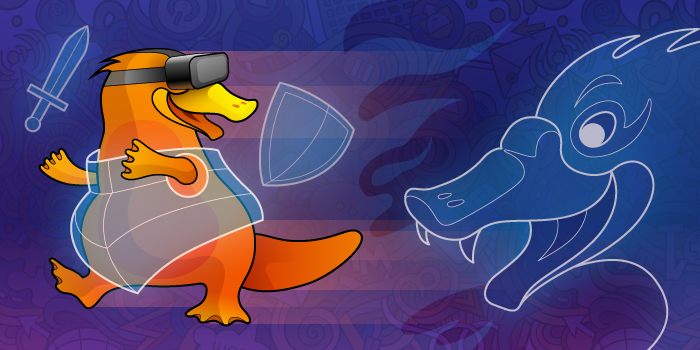 Narrative has long been used in e-learning, but the continual development of virtual reality is opening up new opportunities to make gamification more effective. VR lends itself particularly well to ‘narrative’ elements of gamification. It can completely immerse the learner in the environment and the task at hand, allowing them to observe or even become the main character in a learning exercise.

‘Narrative’ involves using the structure of a story to make learning more attractive. A decent narrative has a protagonist; a relatable character who will go on a journey, an antagonist; the challenging circumstance or events to be overcome, and a plot; the sequence of the events within a particular setting.

In e-learning, the narrative is often conveyed as a scenario. The scenario should follow the format of a story with:

Setup/Introduction – The character and the environment are introduced, and the character sets off on their journey. This works perfectly during the induction or first training module, as the learner will be able to relate to the character being ‘lost’ in their new environment.

Confrontation – This is the middle of your story. The character is faced with antagonising challenges which they must solve, and the plot may involve twists and turns to keep the learner engaged. Minor victories can occur and the character can grow and develop, just like the learner will be doing during this stage.

Resolution – During the resolution the protagonist has grown in a significant and hopefully relatable way. They have overcome the obstacles of the previous stage, and the learner feels this in their sense of reflection on their own experience. The end of the course can point towards new ‘chapters’ for the learner to explore.

This kind of story-based narrative has been used effectively in a number of industries, most commonly as a direct reflection of the training at hand. For example, if you are teaching coding, you could create a narrative in which the main character has to solve a mystery by using various coding techniques.

In the healthcare industry, the LifeSaver: Crisis Simulator uses story and scripting to teach pulmonary resuscitation, while the Nobel Media blood typing e-learning module uses consequence-style feedback to teach blood transfusions. In both cases, the learner plays the role of the character who is treating patients.

A recent study has suggested that gamification does not necessarily lead to more effective learning, but rather certain elements of game design have particular psychological effects. A strong narrative has been linked with social relatedness, which aids internal and extrinsic motivation by helping learners to feel more secure and understood.

To create your own narrative, consider and identify your organizational or training goals, and relate the story directly to these. Use a strong premise and create an immersive world which can evolve and a character who can grow. Keep it simple so that the story does not overshadow the learning, and remember that learning is a continual process. The story should not come to a definite end, but should leave room for more ‘chapters’ (modules).

Virtual Reality should probably be used sparingly in e-learning. It seems to suit particular types of learning, such as kinaesthetic tasks which can be carried out and repeated for practice, and learning in which the environment is crucial – for example, finding fire escape routes for fire safety training. VR also seems to fit certain types of learner: those who benefit from learning by experiencing the situation or environment.

Yet Virtual Reality has quite literally added another dimension to e-learning. In VR, learners can actually be in the experience of whatever they are learning, rather than observing it from the outside. A person can be ‘in’ the solar system observing the collision of asteroids, rather than watching a video about it.

Learners can be either privileged observers who are shadowing the main protagonist, characters who play no active part, or even active observers or characters whose actions have effects in the virtual reality world and storyline.

Take the real life example Virtual Reality House, a full simulation of plumbing scenarios set in a VR world. The plumber is faced with situations in the house which require planning, pricing and installations, and must select the right tools and techniques for the job. The program is currently being used for practice before practical training. With a little more narrative, the learner could play the role of a person whose house is falling down and in desperate need of plumbing repair. Each successful task completed leads to another event unfolding in which something else breaks, and the other tenants are going mad!

Love it or hate it, the implications are massive, especially when it comes to gamification in general, and specifically the use of narrative. The learner is fully immersed in the scenario, giving a higher level of presence and impact to the training. Whether the ‘player’ is an observer, or the active main character, they will feel a stronger social relatedness within the context of the narrative.

For example, imagine a public speaking e-learning course conducted with VR. The learner plays the part of the main character, who finds himself having to speak to an increasingly wide and high-status audience, earning trophies and unlocking bonuses along the way. In VR, they can actually experience for themselves the feeling of speaking to a ‘live’ audience.

In a lot of ways, virtual reality could be said to merge the idea of ‘narrative’ in e-learning, with a more practical element of training. Learners can actually conduct the task is a self-contained setting where the consequences are not far-reaching. As the technology becomes more advanced and readily available, VR will allow for more effective gamification of training and courses, with stronger more involving narratives in which the learner can actually be in the story.

Which e-Learning Authoring Tool is Best for You? Here Are Some Great Options

Options are great. Too many options, however, can be just as bad. When this happens, we tend to look to...

How to Integrate Padlet Into Your e-Learning Strategy

In the climactic scene of 2001’s “A Beautiful Mind,” Alicia Nash, played by Jennifer Connelly, trepidatiously pushes open the creaky...